Upon request from several readers, I will set aside next week for a series of blogs on reforms to government spending, and their positive effects on the Wyoming economy. Before we get there, though, we need to take a look at some state-level GDP data.

Most states are doing well. In the second quarter of 2016 - the latest data available - a total of 14 states had more than two percent in GDP growth over the same quarter a year before. This is good, given that the national economy only mustered 1.2 percent growth. All in all, 37 states enjoyed positive growth, though the 37th, Pennsylvania, barely climbed above the line with 0.08 percent...

Of the 13 states with shrinking GDP, Wyoming ranked second to last, with a GDP that was 6.6 percent smaller in Q2 of 2016 compared to a year earlier.

Things look even worse in the private sector. While government kept growing, private-sector production (in other words, GDP for the private sector) fell by 8.2 percent. That is a loss of $2.5 billion worth of economic activity, adjusted for inflation.

Figure 1 ranks our private-sector economic performance compared to the other states, the District of Columbia and the U.S. average: 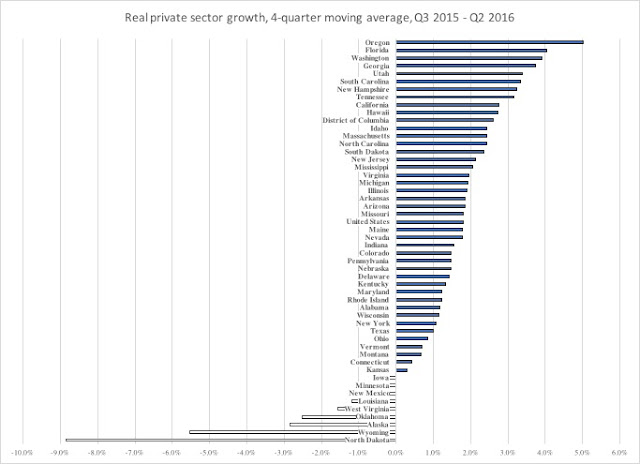 If we disaggregate these numbers, we get a rather telling picture of the current state of the Wyoming economy. Three major points:

1. State GDP - reported as "all industry total" in Table 1 below - is not only declining, but declining faster by the quarter (again over the same quarter a year before);
2. The private sector in total, "Private industries", is in a virtual free-fall, with a disturbing inflation-adjusted decline of 8.16 percent in the latest numbers available;
3. In Q2 2016, production fell in 14 of a total of 19 industries, with ten of them having been in decline for at least four quarters in a row.
.
Table 1 - Disaggregated GDP data for Wyoming

These GDP numbers explain why the Wyoming economy is now losing more jobs in non-minerals industries than in minerals.

It is tempting to compare our rapid economic decline to that of North Dakota and dismiss it as a phenomenon that will pass in both states. After all, there is no budget panic in Bismarck, right?

Yes, there is. The difference is that their GDP is collapsing because of a recent boom in their minerals industry. Our state has been deeply dependent on minerals for decades; we have had a long time to both learn how to reap the profits from minerals and how to handle downturns in that particular industry. The fact that we have turned up our state spending to the breaking point of tax revenue in the best of economic times, is not a problem we can or should ignore simply because the North Dakotans are now suffering from their first revenue-boom hangover.
Posted by Sven R Larson, Ph.D., Political Economist at 10:01:00 AM