What Wyoming Can Learn from Illinois

Sales tax revenue are down across the state. KGAB reports:

This is completely logical given the depression-like decline in overall economic activity as well as the statewide job loss. The latest data from the BEA shows that we have now had four straight quarters of decline in total personal income here in Wyoming (even with seasonally adjusted data, which tends delay major trends).

In other words, the downward trend in the Wyoming economy continues, and - as I have repeatedly pointed out - is not limited to the minerals industry.

This is a macroeconomic disaster unfolding in our state, and the silence from our state's leading elected officials is echoing louder by the week. So far, all they have mustered is to turn this into an education-funding issue for the purposes of raising taxes.

An economy in free-fall, like ours, is about as able to carry a heavier tax load as an ostrich is able to fly. So far there is only limited understanding of this among our elected officials: while I have heard from a few state legislators who say they are adamantly opposed to higher taxes, the new legislative leadership has not uttered a word in opposition to new or higher taxes.

Our governor is also silent on this issue.

Until we the taxpayers in Wyoming have a firm commitment from the legislative leadership and our governor that there will be no increase in our state's tax burden, we need to continue to present arguments as to why any increase in taxes is a bad idea. Perhaps it would help to take a look at a state that has tried to solve an unrelenting deficit problem with higher taxes.

In 2011 The Prairie State raised its personal income tax from 3.75 percent to five percent and its corporate income tax from five to seven percent. These increases were set to expire after four years, which they did: since January 1, 2015 Illinois is back to its lower income tax rates again.

What difference did the higher taxes make? First and foremost, they did not solve the state's budget problem. Leading Democrats in the state have been talking for six months now about returning to the higher tax rates. The budget situation in Illinois is just about as bad now as it was before the tax increases went into effect.

But how can that be? How is it that tax increases do not solve budget problems...?

Well, Figure 1 gives us a hint. 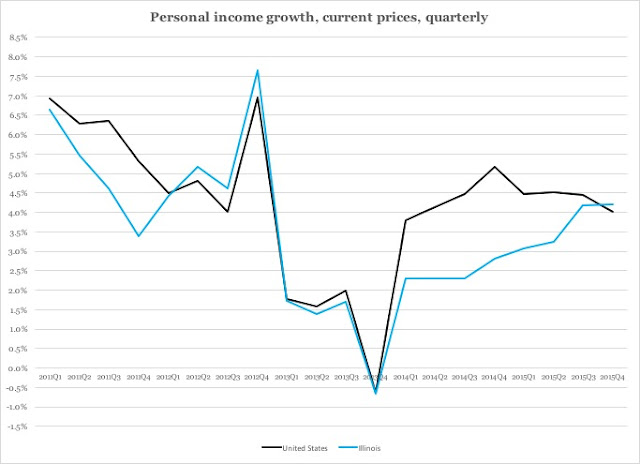 This chart starts when the tax increase goes into effect. Immediately, Illinois (blue) sees a steeper weakening in personal-income growth than the United States as a whole (black). By 2012 the national recovery - weak as it was - kicks in and brings some relief to both Illinois and to the U.S. economy as a whole. Personal income growth seems to be growing at healthier rates for about a year.

Then the weakness of the recovery shines through, and the growth in personal income tapers off again. By the end of 2013 it stops growing entirely. In 2014, there is now life in the national economic recovery. It is driven by the significant decline in oil prices and an overall build-up of confidence that the Obama administration is not going to be able to raise income taxes.

This is where the Illinois tax hikes really start making a difference. As soon as the higher taxes went into effect, the Prairie State started losing residents in large numbers. In fact, it has now led the nation in outbound migration three years in a row. When people leave, so does income. When income leaves, so do tax revenue, both personal and corporate (since people tend to bring their businesses with them). It is therefore completely logical that during 2014, personal-income growth in Illinois fell behind the nation as a whole.

When, on the other hand, the higher tax rates expired in 2015, the growth rate picked up and caught up with the nation as a whole.

Anyone wants to take a guess what will happen...


We are now less than two weeks away from the legislature convening for the 2017 general session. It would be very helpful for everyone in Wyoming if our legislators - and Governor Mead - could come clean and tell us whether or not they want to raise taxes to solve our state's budget problems.

Until they do, we have to assume that higher taxes are part of their anti-deficit toolkit.
Posted by Sven R Larson, Ph.D., Political Economist at 9:21:00 AM