My blog article on December 16 about a 6.6-percent decline in the Wyoming GDP has earned quite a bit of interest. It is now the second-most read article on this blog - thank you! - and I can certainly see why: nobody else is discussing this side of our state's economy.

The point behind that blog article was to ask, rhetorically: if the legislature and Governor Mead want to raise taxes to close the budget deficit, then what part of the economy is going to pay those taxes?

To be clear, I have no immediate reason to believe that either the legislature or the governor are going to propose tax increases during the coming session. However, everything they say about the deficit seems to be designed to rule out, or at least minimize, spending cuts. The only option left, then, is to increase taxes.

Therefore, until the new legislative leadership and Governor Mead come clear on the deficit issue and explicitly rule out tax increases, it is only logical to assume that they will pursue a solution where higher taxes play a big role. Therefore, let me present some more numbers that clearly show why new taxes and higher taxes are bad ideas.

Wyoming is in desperate need of an economic turnaround. Our current macroeconomic trajectory points squarely into the shadow realm of stagnation and industrial poverty. We are not there yet, but if we do not take action now, we will become America's rust belt of the 21st century. I have offered several ideas of reforms and policy goals that would put us back on track again. Here are some examples:


All of these reforms take time, but they have two things in common: they break the current budget trend of unending deficits, and they open our economy for new, private entrepreneurship.

The last point is critically important. We can debate all day long what we think government should and should not do for us; at the end of the day, even the most fervent proponent of more government programs must admit that the cap on what government can provide is set by what taxpayers can afford. Currently, our state's taxpayers clearly cannot afford the government we have; the only reasonable conclusion from this is that we need to transfer government functions from taxpayers' shoulders to the private sector.

One of the many benefits of doing so is that we open up for the creation of many new, small businesses. Good economic research shows that new businesses create a big part of all new jobs in our economy. Since our state's economy is losing private-sector jobs, and losing them fast, our legislature must concentrate all its efforts on policies that will allow our private sector to start growing again.

My reform proposals would help toward that: school choice and free-market reforms in health care would open two entire industries to new, private entrepreneurship. Add to that what, for example, deregulation and lower property taxes could do.

The need for a new era of thriving, small businesses is reinforced by new data from the Bureau of Labor Statistics. These numbers also happen to show why higher taxes is a bad idea.

In the second quarter of 2016, the latest for which data is available, there were 23,900 private-sector establishments in Wyoming. On average, they employed a little bit more than eight people. Two years earlier, in Q2 of 2014, the average establishment employed more than nine people.

While these numbers do not give us a complete picture of the earnings of Wyoming families, they do tell us some important things about what is happening to private businesses in our state. First of all, again, they have fewer employees, but more importantly, the decline in business size has taken place in 19 of 22 counties (there are no numbers for Niobrara). Only in Goshen, Lincoln and Teton have businesse grown - marginally - in average number of employees.

This reinforces the point I have made several times already, namely that the decline in our economy is no longer limited to, not even driven by, the minerals industry. It is statewide and therefore it is also a statewide responsibility.

Another important conclusion from the business-related BLS data is that the ability of the private sector to pay taxes - any kind of taxes - is weakening before our very eyes. The total wages paid out per business has declined in every one of the 22 counties for which we have data. What this means, in practice, is: a) in counties where businesses on average are downsizing their staff, the decline in payroll is a welcome alleviation of operating costs; and b) even in the few places where businesses on average are growing their staff, they are paying their employees less.

In plain English: the average Wyoming business is doing whatever it can to slim down its costs of operation and protect or restore its operating margins.

As the average business shrinks, so does the pay per employee. Consider these numbers from Wyoming: 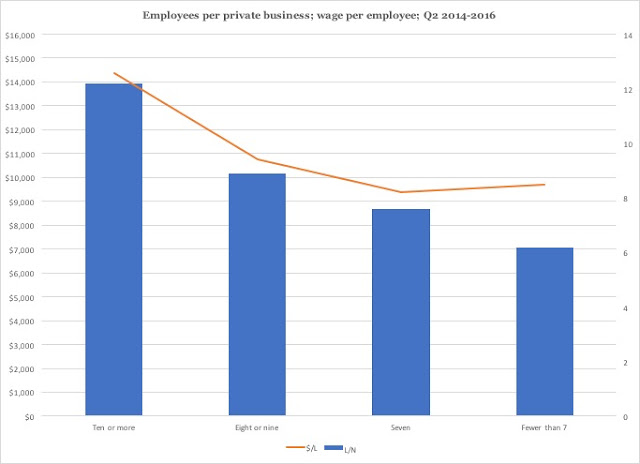 The blue columns (the right vertical axis) illustrate business size by category, from businesses with ten or more employees down to those that have six or fewer. The orange line (the left vertical axis) reports per-employee earnings. Generally, the smaller the business is, the less they pay each employee. There are two explanations for this: first, the margins are almost always smaller with small businesses, making it harder to pay employees well; secondly, owners are less inclined to take out a paycheck in small businesses than in larger ones.

As the average private business in Wyoming becomes smaller, its ability to pay its employees will shrink accordingly. Not only does this present workers in the private sector with personal-finance challenges, but it also means that the business itself becomes a weaker taxpayer.

This last point is very important. As I explained on December 15, any proposal for new taxes in Wyoming would very likely include some sort of corporate income tax. It is a tempting way to weaken the average individual taxpayer's resistance to a state personal income tax. But with the average private business in Wyoming cutting down on staff, and on average paying its remaining employees less, there is less money to grab from our businesses for tax purposes.

This point is not limited to just a corporate income tax. It applies just as much to property taxes, which tend to hit small businesses relatively hard.

Again, while we are waiting for the new legislative leadership and our governor to present concrete ideas on how to solve the state's budget crisis, we cannot rule out that there will be proposals for tax increases in whatever they come up with. That would be the wrong way to go; a much better path forward is to reform spending - and to start a reform plan with an aggressive, short-term macroeconomic stimulus, such as a one-year sales-tax holiday to give Wyoming families a break. That would put lots of money back into the private sector, grow consumer spending and create new jobs locally. During the year when the sales tax is suspended, our legislature could launch long-term spending reforms to open up the economy for new entrepreneurs and new jobs.
Posted by Sven R Larson, Ph.D., Political Economist at 10:41:00 AM