A Conversation about Wyoming's Future

My blog articles about the campaign to raise your taxes ("The Campaign to Raise Your Taxes", "How to Cut Taxes by $1.5 Billion" and "$400m Deficit: See I Told You So!") has drawn both praise and scorn. I appreciate the support and encouragement from you blog readers - thank you and keep up the good work in your communities.

The one part that bothers me is that the conversation about the serious economic situation in our state seems to bring out the worst in some people. As an example, I got an e-mail from an influential legislator, sent over his private e-mail but signed in his official capacity as a representative of the people in his House District. The highlights of the e-mail are as follows:


Do you have any illusions as to how your piddling nonsense regarding how Wyoming's fiscal crises can be solved. You apparently assume we can just cut our way to zero for all programs and departments and pretty soon we will all be prosperous again!

And, instead of "Sincerely", the person signed off with this:


And please seek psychiatric help when you get a chance.

Personally, I am not bothered by this kind of language. I have worked with politics and public policy off and on for 35 years, and I have seen, heard and been called far worse things by far more important politicians than this person.

What does bother me, though, is that this is a conversation about the economic future of our state, about methods and measures needed to avoid a full-scale economic disaster, and what to do to make sure we save this state and secure a future for our kids here in beautiful Wyoming. This is a topic that should be inclusive, where pertinent information and analysis is being taken seriously and disseminated as such in legislative circles.

Instead, the tone among our elected officials seems to have grown tougher with the economic crisis. The e-mail I received is just one example of that, and it makes me wonder how a freshman lawmaker, taking his or her first major elected office, would dare bring up controversial yet innovative ideas on how to solve the state's economic problems.

Regular readers of this blog know that I am no fan of tax increases. My resistance to such measures is, however, not based on principles, but strictly on economic analysis. The Wyoming economy is weak and the last thing our taxpayers need now is an increased burden on their shoulders.

I am well aware that there are lawmakers and others who strongly disagree with me, who believe that we cannot cut government spending but instead need to focus all our efforts on "finding new revenue sources", in other words to permanently raise taxes.

Instead of innuendo as exemplified above, I would welcome a vigorous debate about fiscal and economic issues in our state. If we concentrate on facts, good analysis and - again - the issue itself, we do have a good chance to make Wyoming great again. (Sorry, couldn't resist that one...)

As an invitation to such a debate, let me again focus on the issue and the facts. One big reason why we should not raise taxes is that the private sector in the Wyoming economy is getting weaker almost by the day. For example, wages in the private sector have declined, even as they have risen in almost every other state. Even worse: the decline is basically statewide. showing that our crisis is no longer just about a weak minerals industry. The Bureau of Labor Statistics reports that from the first quarter of 2015 to the first quarter of 2016, private-sector wages declined in 17 Wyoming counties: 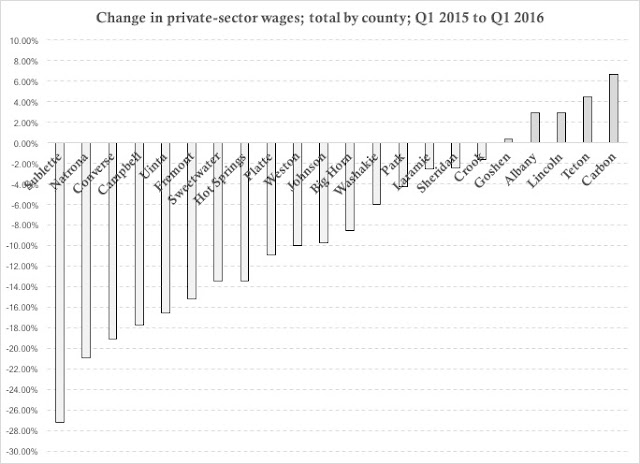 This decline is not limited to just earnings in the minerals sector. They are, however, tied in good part to job losses - for every minerals job we lose, another private sector job is lost - and lost consumer and small-business spending. So long as the private sector is getting weaker, it means that the tax base is shrinking. While tax increases are bad no matter when they hit the economy, it is definitely the wrong timing to raise taxes when the private sector is in decline. That will only add insult to injury.

I have pointed to alternatives to tax increases, such as a general reduction in state and local government employment to the same relative levels as in Texas or Nebraska, asking what we get from our state and local government that Texans and Nebraskans have to do without. I have also suggested a voucher-based school-choice system that would lead to significant cost reductions over time. Furthermore, I have proposed the privatization of school buildings as a solution to our problems with funding the construction and maintenance of educational facilities in our state.

I welcome the arguments of anyone and everyone who disagrees with me, who thinks that higher taxes is the only way forward. I will gladly give you room on this blog to present your views, your analysis and your conclusions. All I ask in return is that you keep your tone civil, stick to the issue and avoid ad-hominem attacks.
Posted by Sven R Larson, Ph.D., Political Economist at 9:15:00 AM