Last week, the state's Economic Analysis Division released the November edition of its Wyoming Economic Indicators (WEI). The report, which is technical in nature, does not editorialize its statistical message. That job is left for the media to do. For example, KGAB reports:

Economist Jim Robinson says the WBCI gives a good overview of the state economy by factoring in the four components and devising an overall score as opposed to just looking at items like unemployment or mineral production by themselves. The bad news in the report is that Wyoming’s September 2016 WBCI index score was 94.99, down from a September 2015 score of 99.01. ... But the September 2016 WBCI score was still an increase over the August WBCI of 94.30. It also reversed a four month decline in the WBCI that Robinson says clearly shows the state economy was getting worse between May and August. Robinson says that while he would like to see two or three months of an improving index score before drawing any real conclusions, it does tend to confirm that the state’s economic downturn has bottomed out.

Our elected officials should take this decline seriously. Here is why.

When the index has been negative for 16 months in a row, we have reasons to assume that the economy as a whole is in steady decline. A comparison between the index and Wyoming GDP growth rates verifies this: 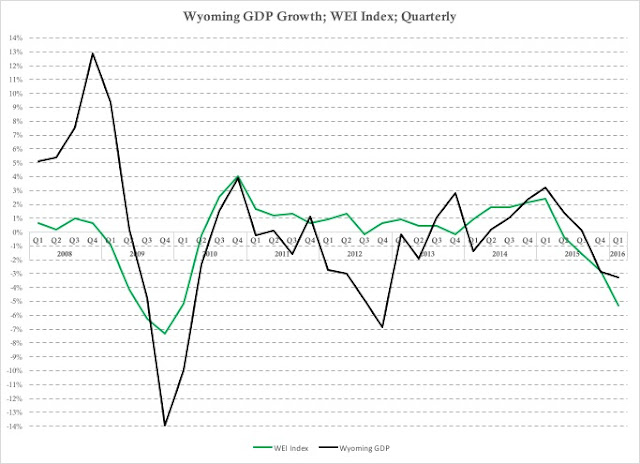 If we start from the right side of the chart, it is clear that the past 16 months of WEI Index decline correlates with a decline in GDP growth (since the GDP time series ends with the first quarter of 2016, there are no index values reported after that point).

Moving left, i.e., reading the time series data "backwards", we get to a period of time where the growth rates of the Wyoming GDP are pretty bad (worst in the nation, actually) while the index continues to improve at small but steady rates. In other words, the index fails to pick up on the economy's poor performance. The reason for this is to be found in the components that constitute the WEI index: jobless rate; private wages; mining taxes; and park visitors. At the point where GDP started declining again after the brief growth spurt in 2010, the tax revenue stream from mining operations was still strong. This, and with low unemployment, was enough to keep the WEI index high.

The discrepancy between the WEI index and GDP growth for the 2011-2013 period is not just of technical, economic interest. It has a direct implication for the state legislature's budget policies. If the index suggests that the economy is doing relatively well, then legislators are not inclined to take the necessary long-term budget-adjusting measures that  are necessary based on the weak performance of the state's GDP.

In short: the relative strength of the WEI index discouraged the Economic Analysis Division from sending the proper macroeconomic signals to the legislature and the governor, thus delaying any reaction to a weakening state economy.

Now, though, the WEI index is in accord with what is really happening to the economy in Wyoming. It is an even better correlation than we can see in Figure 1 during the period that leads up to the Great Recession. From mid-2008 through late 2009 the WEI index fell steadily, as did GDP. The decline in GDP, however, was much more dramatic, again suggesting that the index under-estimated the actual performance of the state's economy.

Over the past year and a half, the index has been declining in close tandem with GDP. Unlike what Jim Robinson, economist with the Economic Analysis Division, suggests in the KGAB quote above, this is not a good time to talk about positive signs in the economy. At best, we could say that the economy is plateauing after a steady decline, a phenomenon that is perfectly logical and expectable. That, however, does not mean the economy will automatically rebound back to historically higher levels of activity; more than likely, it is now settling in at a "new normal" level of economic activity.

This lower "normal" means permanently lower tax revenue. That, in turn, has serious and direct implications for the legislature going into the 2017 budget session: permanent reductions in spending should be their first and foremost priority.
Posted by Sven R Larson, Ph.D., Political Economist at 10:19:00 AM