Wyoming Governor Matt Mead has launched a new initiative to diversify the state’s economy. The Economically Needed Diversity Options for Wyoming Initiative, or ENDOW, will coordinate and expand ongoing efforts across the state, as well as produce measurable results expanding Wyoming’s economy. “We need immediate and measurable results now,” said Mead during the Governor’s Business Forum in Cheyenne on Thursday. “We need to build on recent success in establishing technology as a fourth leg of Wyoming’s economic strength; efforts to add value to coal, minerals and natural resources; and on our success in a growing manufacturing industry,” added Mead. Mead says many economic studies and plans over the years really haven’t addressed issues that are still pressing in 2016.

He is correct. Every study I have seen of the Wyoming economy takes for granted that the state's dependency on minerals is: a) inherently good; and: b) will never end. The minerals industry is important and should be allowed to operate on the same free-market conditions as all other sectors of the economy. However, as I explained yesterday, our state could benefit dramatically from industrial diversification.

Up until now I have known Governor Mead as unwilling to understand the depth of our state's economic problems. His ENDOW initiative changes that impression - our state's chief executive officer is a welcome fellow traveller on the road to a stronger Wyoming economy. His change of heart and perspective is even more welcome given his new long-term outlook: according to KGAB the governor is now interested in the 20-year economic horizon.

It was not long ago when the governor's State of the State speeches painted a rosy, everything-is-fine picture of Wyoming.

Hopefully, the governor's ENDOW initiative will make a difference for the better. The only somewhat worrisome part of his presentation is where he says that Wyoming has "four strengths": technology and "coal, minerals and natural resources". I am not a geologist, but I do believe that coal is a mineral which is a natural resource.

In other words, I suspect the governor still has some distance to cover before he fully understands the meaning of economic diversity. The facts of the matter are that our four largest industries are: mining, government, financial services and trade (wholesale and retail). "Technology", which is not a separate industry, shows up to some degree in transportation and warehousing, which is our state's fifth largest industry. Server parks, which are increasingly popular investment objects for rural states, are a kind of warehouse. 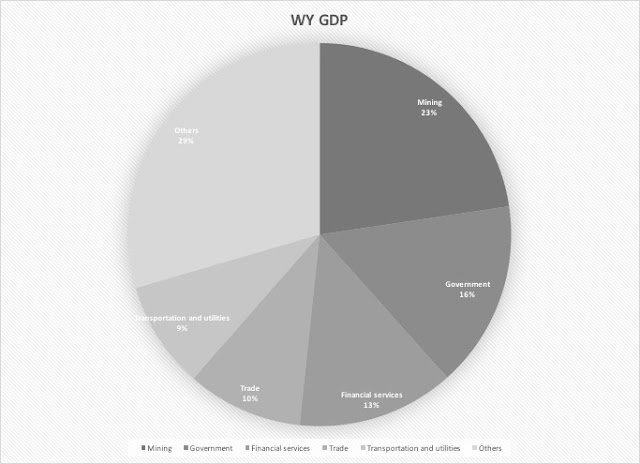 I don't blame Governor Mead for not sticking to the national-accounts system for industrial classification. I just wish he would add two things to his 20-year outlook:

1. A specific set of policy measures to grow the non-minerals part of the private sector. Corporate welfare will not do it. We need a regulatory overhaul to get rid of onerous, costly and overlapping regulations. We also need reforms that improve access to venture capital and lower the costs of health insurance (especially for small businesses).
2. A plan to reduce the size of government in our state's economy, both in relative terms and absolute numbers. Such a plan would preferably begin with the opening-up of new sectors to private entrepreneurs, such as our K-12 school system and Medicaid.

Again, Governor Mead is a welcome fellow traveller into a better future for Wyoming. Let us hope he continues to evolve his perspective on just what the journey is all about.
Posted by Sven R Larson, Ph.D., Political Economist at 8:41:00 AM