A committee of state lawmakers voted Friday to advance a bill that would require large online retailers to collect sales tax on purchases made by Wyoming customers. Members of the Legislature’s Joint Revenue Interim Committee voted to send the bill to the full Legislature when it convenes in January. Supporters of the measure say such a law would even the playing field for businesses in Wyoming. That’s because customers may be inclined to buy items online instead of at Wyoming businesses to avoid paying sales tax.

Nonsense. This has nothing to do with leveling the playing field.

If that were their motive, the members of the Revenue Committee would have chosen to reduce the state sales tax. Our state is in an economic crisis with, among many other things, unending job losses going on now for almost a year and a half with no end in sight.

The members of the Revenue Committee are smart enough to know that tax increases have a dampening effect on economic activity. If all they wanted to do was to reduce the distortionary effects of taxes on business activity in Wyoming, they would have adjusted the existing sales tax to the conditions that apply to internet retailers - not the other way around.

So what is their real motive for the internet sales tax? The Wyoming Tribune Eagle again:

Sen. Ray Peterson, R-Cowley, co-chairman of the Revenue Committee, said it comes down to not creating an advantage for large online retailers over local businesses. “It’s not a new tax; it’s the same tax we charge at our Main Street businesses,” Peterson said. “It’s a fairness issue with me.” Peterson also said the bill would help Wyoming diversify its revenue streams. “This is just one of those areas we aren’t fully assessing the sales tax,” he said. Peterson said he expects the bill to pass the full Legislature.

There you go. "Diversification of revenue streams" means adding new tax revenue to the state's budget. In other words, this is a tax increase on Wyoming households.

But it is not just a tax increase. It is a poorly timed tax increase, both short term and long term. Short term, our state's GDP is in the negative, having shrunk by $1 billion in fixed prices in just one year; even the otherwise inexact Wyoming Economic Indicators index now points squarely to a deep recession.

Over the long term, tax collections is outpacing consumer purchasing power. According to data from the Bureau of Economic Analysis, reported in Figure 1, the collection of state and local taxes in Wyoming has outpaced disposable income among Wyoming families for at least the past 15 years: 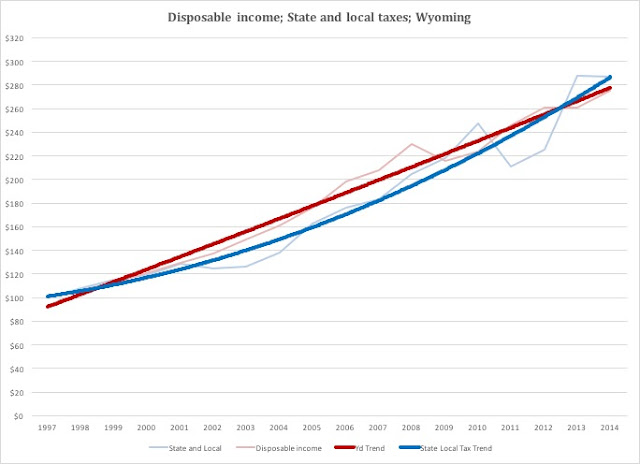 In other words: Wyoming families are barely keeping their standard of living intact as government keeps nibbling away at their incomes. Now the Joint Revenue Committee wants to add another tax on top of what they already take from Wyoming families.

The committee members have allowed their resistance to long-term, structural spending cuts to cloud their judgment. Hopefully, economic common sense will prevail over fiscal greed once the legislative session starts.