Employment and Earnings in Wyoming

In tomorrow's election, a lot more is at stake than who the next president is going to be. Regardless of whether Donald Trump or Hillary Clinton becomes our nation's next chief executive, the economic crisis in Wyoming is going to be there for our legislature to deal with. Yes, Trump has said that he is going to lift all regulations on coal that Obama has put in place, and that will certainly be good for the coal industry in our state. But as I explained recently, even under such favorable circumstances, it is foolish to bet our state's budgetary future on the hopes for a coal rally.

Besides, does anyone really believe that the environmental industry and all its campaign arms will suspend their activist activities just because Trump repeals Obama's War on Coal regulations? Expect years of court battles and, at best, slow progress for the repeal efforts.

I do not mean to sound overly pessimistic, but as an economist I live in the world of probabilities. As much as I might, personally, wish for Donald Trump to be able to restore the Wyoming coal industry to its historic heights, I cannot disregard the realistic factors that very likely put hurdles in the way of his policy ambitions.

But even if Trump were successful in rapidly repealing all coal-stifling regulations, it does not mean that the free market will restore coal back to its prominence of yore. As the U.S. Energy Information Agency reports, coal has gradually become less important in our nation's electricity production. There are more ways to use coal than for generating electricity, but the KwH production is a good basic indicator of where coal as a product is heading: 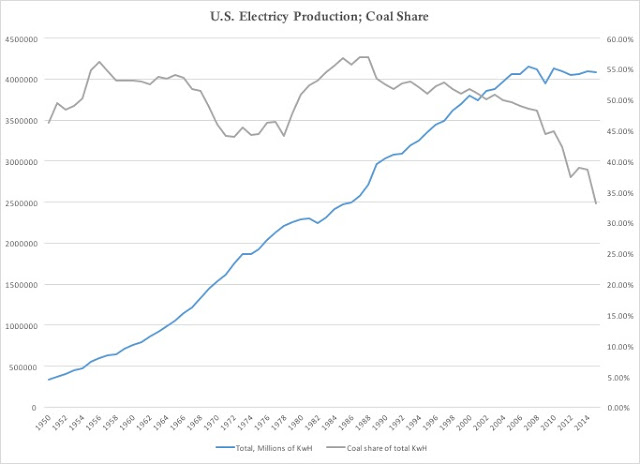 As Figure 1 shows, the demand for coal has been stagnant or in decline for quite some time. That is not to say the War on Coal has been irrelevant - on the contrary, it has clearly, irresponsibly and unnecessarily exacerbated the downturn in coal production. But it is important to keep the longer view in mind, because it reinforces the point I made above that even if the War on Coal ended tomorrow, that would not necessarily mean a new coal rally. 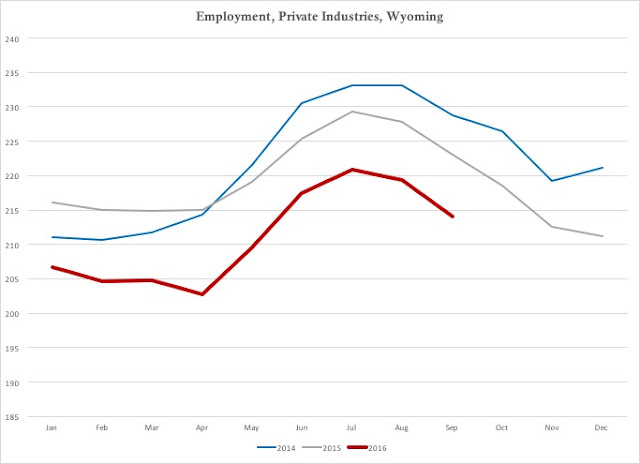 Another, related indicator is the average weekly earnings of a private-sector employee. Figure 3 explains how that variable has declined substantially over the past two years: 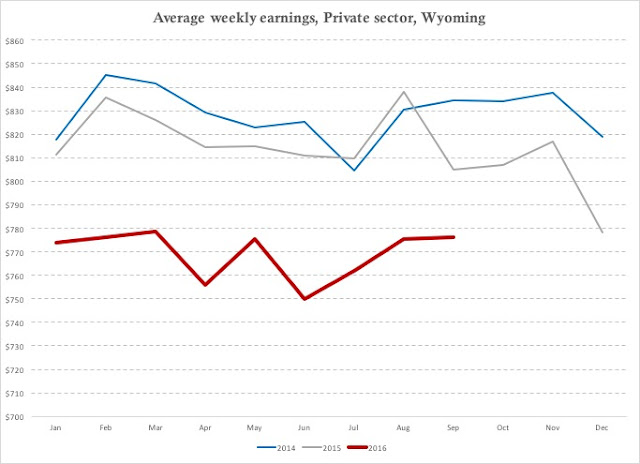 Much of the decline in the private sector is caused by the significant drop in minerals production. For example, the employment numbers for the minerals industry are substantial: 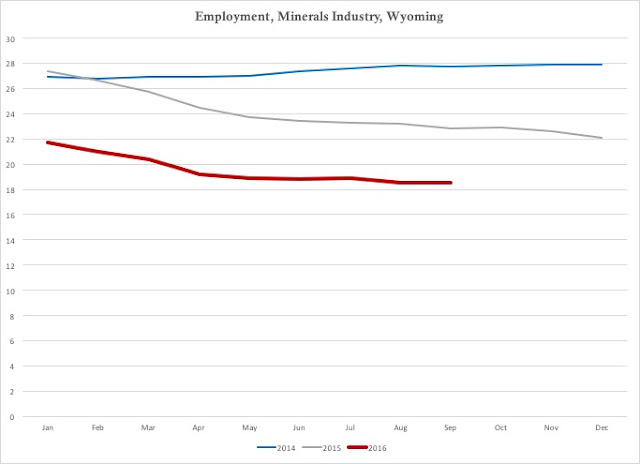 This is expectable. Any industry that goes through a substantial decline of a long-term nature will, sooner or later, flatten out. When it does, it will be at its new, long-term "equilibrium" level of activity. At the macroeconomic level, the best examples in recent years are the Greek, Spanish and Portuguese economies. Greece has lost one quarter of its economy and is now "humming along" at a level of economic activity that is notably worse for everyone.

From a microeconomic perspective, a good comparison would be the U.S. steel industry after its decline in the 1970s.

In short: expect the new, lower level of coal production and employment to become the "new normal". 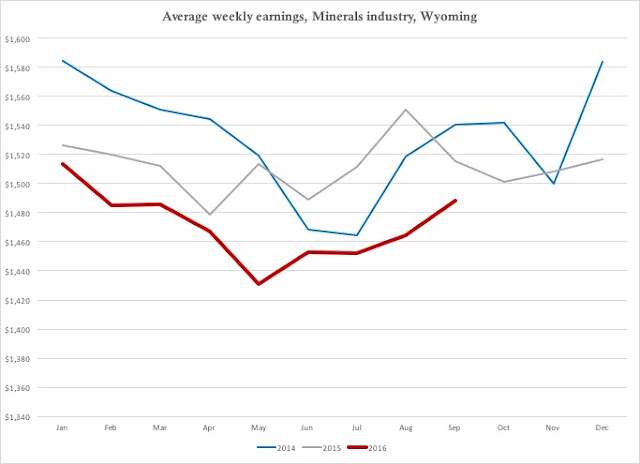 About the same time as weekly earnings in the minerals industry stop declining earlier this year, Figure 4 shows how the downturn in employment is almost over. When an industry that has gone through a long period of decline finds that its business conditions are leveling out, it will also experience an increase in productivity. We can see this in value-added data from the Bureau of Economic Analysis (let's take a look at those numbers later). Logically, this leads to a rise in average earnings.

Once earnings reflect the increased productivity, they will level off in the same way as employment has.

In conclusion, then: the Bureau of Labor Statistics numbers reported here reinforce the picture of a state economy in a long-term structural change for the worse, with a minerals industry that is beginning to find its "new normal" operating levels. The consequences for the state government are as obvious as they are inescapable: permanently less tax revenue.

The incoming state legislature for 2017 better get used to this fact, stop scraping the bottom of the revenue barrel, and reform government spending accordingly.
Posted by Sven R Larson, Ph.D., Political Economist at 10:33:00 AM